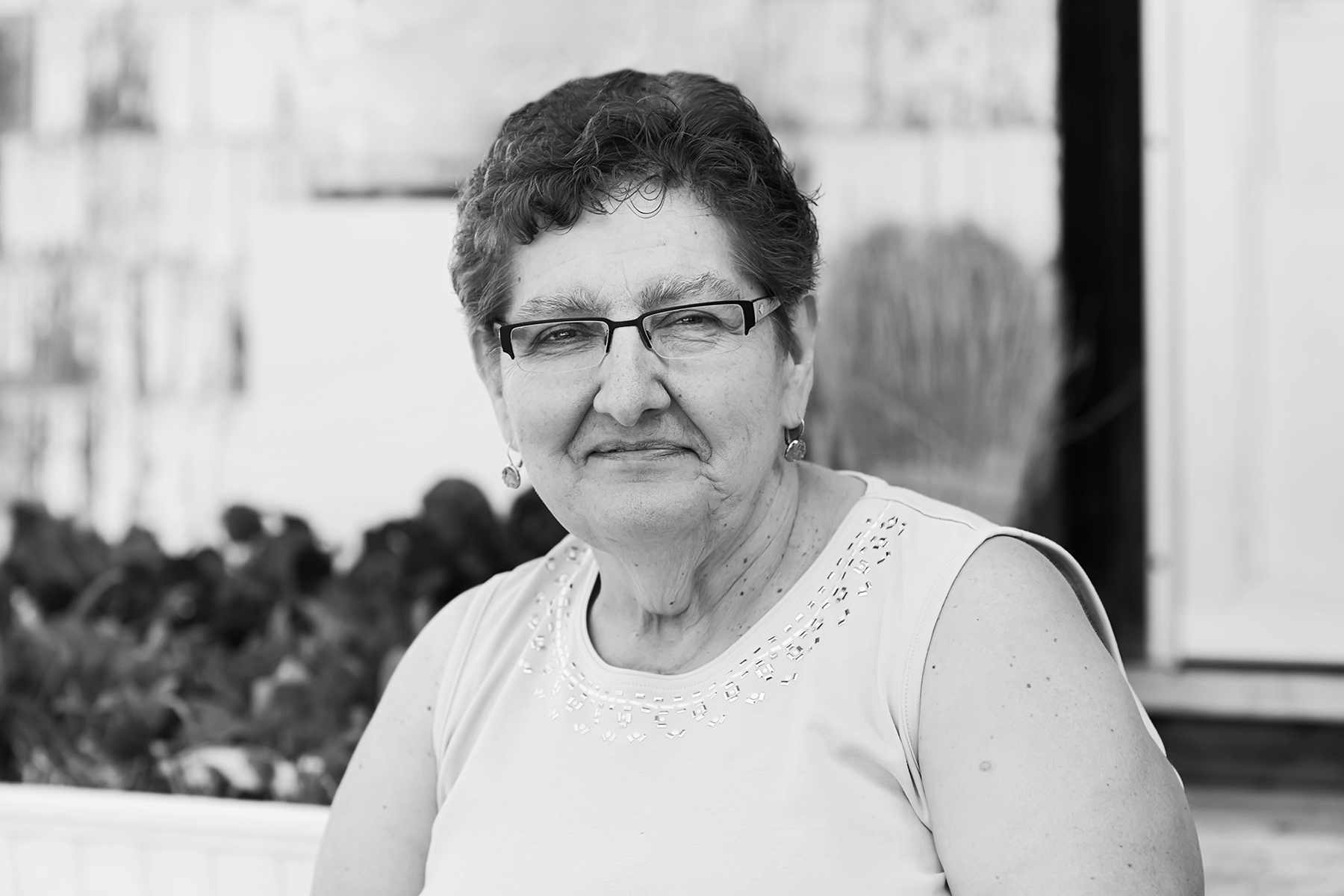 What is one physical item that you have that holds sentimental value?

I have a doll. I don't know how old it is. But it belonged to one of my aunts, who was 98 when she passed away. She had given it to my mom. When my mom was moving into an assisted living place, I said I would like that doll. It's an older doll. It's got the ceramic head, but the body is cloth and ceramic.

What talent do you wish you had that you don't?

That's a good one! I really don't know, because I'm happy with the talents that I have, and so grateful that I was given them. I love to bake, and cook, and can and garden.  I grew up at my mother's apron strings. From the age of 12 I was baking bread already. I had an invalid sister. The youngest of the five of us. So mom didn't have time. So guess who took over? There are times when it looks like I don't care about my house, because I do those other things I love instead. In the summer time, I would sooner be outside. This is the 7 year I've had the priveledge of helping out at Lois's. I can hardly wait until the spring when she calls me. I get the plants ready for sale, trimming them up, picking off all the dead stuff.

What life event changed you?

Getting married! For sure. We got married January 21st, 1983.  It was very very mild that day. It basically drizzled. It was an evening wedding in Altona, MB. Some Grenfell people made it.  It stayed mild until it got back from our honeymoon in the states, then it got really cold. We went down to Grand Forks and Fargo and Jamestown. So we've been married 35 years.

What do you want to be remembered for?

I'm hoping when people think of me, they'll think that I was a good listener. I try very hard, because I think it is important to listen to people, for the simple reason that there are some that can't share stuff with everybody. I think that you need to take the time to listen to them, especially people who have issues with depression. I have a really, really good friend who does have issues, and once in a while our daughter goes there too. At the start I didn't understand that, until I listened to them. Then it made a difference. Then they opened up even further. I still don't get everything, but at least I can know that if I can listen, they can talk.  That's how I feel about that. If you don't listen, people won't talk. Depression is something you don't see on the outside. With my daughter, when she tells me that she's sleeping a lot, and doesn't want to get out of bed in the morning - and she has an awesome job - then I know it's important that I need to listen. And I need to say O.k. You know what you need to do. Your body is telling you this is what you need to do. Step back, take some time for yourself. Don't always feel you have to do things for others. She gets that from me. I'm supposedly, like my grandmother was, always making sure the next person is taken care of before I am. So my daughter is the same. She's inherited lots from her mother!

If you could travel via train, plane or boat, which would it be?

Well, I've done the train, and I've been on a plane, and I've also been on a boat. It was kind of a cruise, on Lake Winnipeg. It was on the MS Lord Selkirk. Me and my girlfriend at the time. It was from friday evening until sunday. We went to Hecla Island. We got to spend an afternoon going through the bush. There was an old Hudson Bay store there. There was entertainment on the boat at night. They did a Mad Hatters thing, where you had to be inventive as to what we did. It was fun. I'm not very good at bringing up stuff like that, but my girlfriend was, and we did it. As for the plane, I flew to Hawaii in '77. And the train, I went on that twice. From Winnipeg to Edmonton. My favorite of all three was the train. You get to interact more with other people.

What is your biggest fear?

Dying in a fire. Just the thought of it, even when I see it on t.v., it almost makes me sick to my stomach. You know, because of that, I don't believe in cremation either. I know you're gone, but just the thought. I wasn't raised with that. I grew up in a sheltered community and at that time - I'm of Mennonite background - it just isn't something you do. My mother is very adamant about it. I've told my family, and I know Bob has different feelings about that, because his brother was cremated. But the burning idea doesn't sit well with me. We're getting a little bit morbid now!

Have you ever been on a blind date?

I think once, years ago. Ya, I guess it was blind, because my cousin had set it up with somebody. I went out with that guy a couple times, but we weren't made out of the same cloth. Eventually, the more I saw him, even though it wasn't often, he liked his alcohol. And I didn't like that at all.

You're on the roadtrip of your dreams. Where would you be headed?

North to Alaska to go to the cruise ship. I would love to do that. And another one would be to Nashville, TN, to the Grande Ole Opry. But to go north along the coast to Alaska would be awesome. I've got friends and cousins who have been, and they say it's just awesome. Bob would like both of those too. I've often said I'd like to go back to Hawaii, but that was in '77. 40 some years ago. But that's not his style of travel. So much has changed there too. Things have been so much more commercialized since I have gone. At that time, my friends would go to the beach, but that wasn't my style. I had gone with the intentions of seeing things. We had booked a lot of tours. We did the Polynesian Culture center, we did Pearl Harbour, a luau and some other entertainment. We were there over Halloween, so that was a real hoot. Those people go all out to celebrate. But I would walk around in the market place, which is just about a block and a half away. You didn't have to be scared that you would be approached, and that has so changed.

Do you consider yourself a person of faith?

Yep. I do. I strongly believe. Not that I attend church or profess it that way. But I'm of the opinion you practice what you preach. People see by how you behave. That is way more important than sitting in the front pew of the church on a Sunday morning. And I believe that a lot of this comes out of nature, that I have this strong faith. I cannot comprehend how anyone could not believe that God created all of this (looking out the window at her beautiful plants and trees and the sunny skies) I've never talked to an athiest, knowing they were an athiest, but I can't understand how they think the way they do. This doesn't just come out of the test tube. This was created by somebody. So ya... I could just never think that it was any other way. Even when you have this modified grain that they make now. If God hadn't given you the brains to do those kind of things, on your own, you couldn't do this. You may not feel you are being guided, but you are.

Knowing what you do now, what advice would you give to your 18 year old self?

Probably, don't think that your parents don't know anything, because they do.  They've been there. They've done that. Mind you, in this day and age, things are a little bit different. But still. An 18 year old isn't mature enough to make some of the decisions. But we led a more sheltered life, and we didn't do a lot of the things that my friends and family did in the community. But just because everybody else is jumping off the highest building, don't you need to follow. That was something that I always really said to my kids. And I mean, they were 18 at the time. But that's something I would tell my 18 year old self. Just because you don't think mom and dad are smart, that doesn't say they aren't. They are. 18 year olds think they know everything. They think they're invinsible. Nowadays, some people are getting married around 25 or later, and the brain is more mature by that time. You can make better decisions. But at 18, your brain doesn't always have the capacity to make the right decisions. Some people say, into marriage a few years, oh. My partner has changed. And I was sure that had happened with Bob. But it was me as much, but I didn't realize it until someone made a comment to me, that maybe it isn't just him.  And so I stood back and looked at myself, and ya. It wasn't just him. We had both changed, and in that process, I hadn't really adjusted to his change. I don't know how he was with mine. But then all of a sudden, you step back and look at it and realize hey. If I come half ways, or three quarters of the way across, things will be different. And they were.