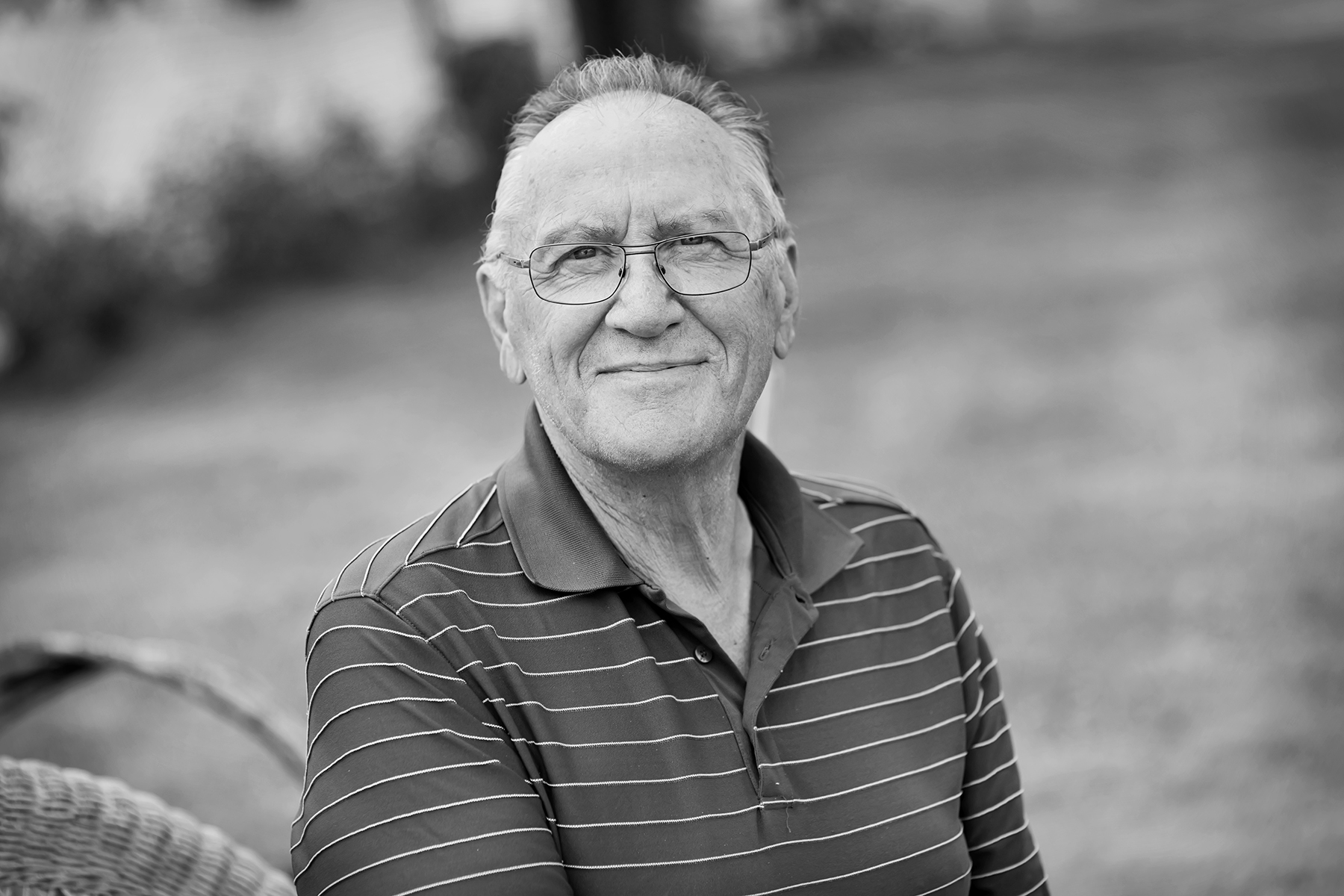 Family: Married to Karen, one grown son and spouse, and two grandkids

Where were you in life 10 years ago?

Well, ten years ago we were living on a farm, north of town, the Les Gettle farm that we bought when we moved back home. I was raised in Grenfell, and so was Karen. Then we were away for a lot of years, then moved back here. My mom was here, and Karen's dad was still alive, so we kind of moved back home to take care of the old people you might say. We were in Strathmore, AB before that, and also in Victoria, B.C. So ten years ago we had a little bit of cattle here, doing a little bit of farming. We also started Aspen Grove home about then, with some other people. We renovated and got that going about ten years ago.

Have you ever hitchhiked or picked up a hitchhiker?

I can honestly say, no. I've always been leary. Now years ago, and I'm much older than you, but years ago there were a lot of armed forces people that hitchhiked - you know, with their uniform on. And I often thought that I should, but never have. I suppose I did hitchhike once myself. I had a 1953 Chevy, and I had three flat tires at one time. We couldn't afford new tires, and I think I attracted nails from the ditch. So I had to hitchhike with my spare tire to get to town.

Beach holiday. Karen and I have spent the last two years travelling to Hawaii, and last year we took our family - we have two grandkids - and Al and his wife. We love Hawaii. If I was younger, I'd move there. I'm just in love. It's safe. I always feel safe. Mexico, we were there years ago, and I never felt good. Cuba - a communist country - I didn't feel as safe. I want to be some place, where if I happen to get thrown into jail, for whatever reason - and it doesn't take much of a reason - I've got a chance to get out.

What is something interesting about you that others might not know?

I love sales (at this point my interest is peaked, because I see two photos of sailboats on the wall behind him, and in my mind, I'm thinking he's going to tell me he's a sailor at heart. He meant "sales", not "sails") I was in the service station business most of my life. We were always doing something sales wise. A lot of people will say "I'm not a salesperson", but actually everybody is. When you were a baby, and you wanted to get fed, you cried and mom would feed you. So what are you doing? You're selling yourself. And some people may know,  I also love golf. I try to golf twice a day.

Have you ever met anyone famous?

Several people actually. Ian Tyson was one of my favorite people. Met him in an airport. And me being the person I am, I had to go up and shake his hand. That was in 1976, in his prime. I also have met George Reid several times. When I worked in Calgary, I was invited or won a chance I guess, to have lunch with the mayor and that was Ralph Klein at the time. He was a different kind of guy, but I liked him. And then I guess the most famous person I ever met was Tommy Douglas. I'm a Tommy Douglas fan. My father was a die hard old CCF'er. I always thought with Tommy bringing in medicare - as much as some people in Saskatchewan opposed it at the time - it's all across Canada now. That was probably in the early 70s.

What is something you do to show kindness?

I guess I have probably put in a lot of time volunteering. We've been here since 2001, and I've been on the Coop board with you, President of the Coop board, and I was on the Lace "Em Up committee when we had the marathon. Grenfell Lions Club, I've been president twice - I was the founding president of that. Town council for four years, and everybody should have a run at that! And Community Players, five different shows. So I guess I've spend 100s of hours volunteering, and I like to do that, to help people out. I'd like to see a little bit more maybe, having some events for the seniors, and poorer people. To have a free meal, or something, whatever that might be. Over the years Karen and I have helped a lot of people out, who are less fortunate than us. I think you make your own breaks in life, but you still have to take a chance to help people out.

What would you want to be remembered for?

I think, again, volunteering. Just helping people. I've always been one to help community. So I guess that's almost the same answer as the other one. Maybe giving young people a chance to better themselves a bit. I think one of the mistakes we make in Canada, is that there are so many seniors out there with so much knowledge, and it's too bad that we can't get some of that knowledge out to our schools. Even just you go for a half an hour next thursday say, and talk about your business. You know, we've got so much knowledge and I don't believe we're using it. We're dying now, us old people - I'm not ready yet! But we have a lot of knowledge that we could help the young people out more. One thing my mom did, when we lived in Strathmore, is we had a bunch of friends over, and she made apple struedel. The girls eyes got so big watching her stretch the dough. And I thought, now there is an art that is certainly dying. People haven't got a clue how that is made, but it's something that our parents, especially of German/Ukrainian heritage always did.

What is something you did in the last 24 hours to make someone's day brighter?

Knowing what you know now, what advice would you give your 18 year old self?

I think probably I would try to get a better education. My goal in life was to be a lawyer, and I never did get close to that. Getting an education, or getting a trade I think is really important. I grew up in a farming family and when I was 19 and Karen was 18, we got married and moved to Calgary. That's where I got involved in the service station. At one time we had the Esso in Stoughton and the restaurant there, then we moved to Victoria and had several stations there. Anyway, I think just getting a better education and listening to the teachers a little bit better. Less rebellion.