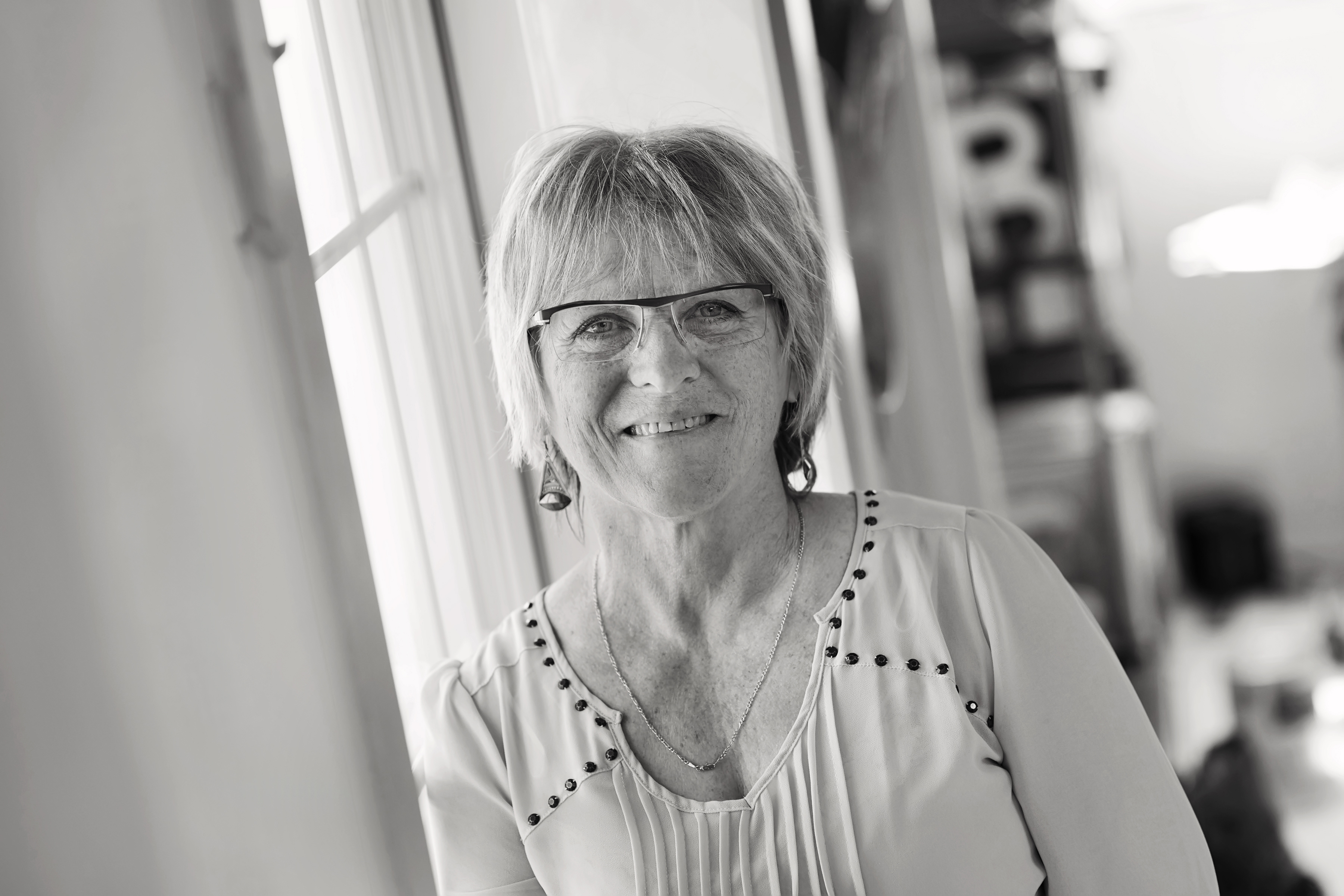 Family: Married for 40 years with three children and 6 grandchildren

Age: Over the hill - Midlife!

Where were you in life 10 years ago?

We were here, in Grenfell. I was teaching the LPN program at Cowessess. I was also working for Health Canada at Kahkewistihaw.

Someone told me when we moved here to never leave your car doors unlocked, because the worst thing about small town living is you'll come back and there will be grocery bags of produce in your car - people will come by and put vegetables in your car from their gardens. I laughed at it at the time, but it's true. When you go to visit people, they'll send you home with a bag of groceries, or bread, or John (Lyn's husband) will bring pies home. That's pretty sweet. And everybody knows everybody, pretty much. That can be good or bad, but for the most part it's good. We lived in Swift Current, Vancouver, Ontario...if I want to be in the city, it's only an hour away. But here I can sit on my deck and hear the traffic go by, but it's quiet. I think that's the nice thing about small town.

What talent do you wish you had that you don't?

I'm not very musical, like playing instruments. I did take accordian, and I did take guitar. But I've never followed up on either of them. I'm not a typical pastor's wife who can sit down at the piano and lead the music. I do lead music, but not with my own musical abilities.

Have you ever lived in another country?

Yes, I have. I went to Africa when I was 2 years old and I lived there until I was 21. We would be there for three years, then back to Vancouver for a year, then back for 4 years. So I did part of kindergarten and grade 1 in Canada, then grade 5, and grade 10 & 11. I lived in Burkina Faso. It's been on the news lately, sadly. (https://www.enca.com/africa/100-arrested-explosives-seized-in-burkina-faso-raids) A few years ago on the Amazing Race, they went to Burkina Faso and milked camels and they rode the train. I was watching the episode, saying "Hey! I know that spot. I know that place!" It's not a very big country. It's on the west coast, sandwiched between the desert and the coastal area. It's a small triangle shaped country, borders on Niger, Mali, and Nigeria off to the side. My plan was to go back there to work. That's why I came back to Canada to get my nursing. I went back in 2012 with my mom.  That was an amazing trip. My brother and his family are still there.

What was your favorite subject in school?

I liked English. I had a really good english teacher. She was just a great teacher and made it a fun subject for me. I didn't have a lot of in school experiences - I was home schooled for the most part. We read everything, so english wasn't something I struggled with. It came naturally to me. You knew you weren't like the other kids in school (referring to coming back to Canada for some grades) You know, monkeys swung in the trees and didn't sing, beetles crawled on the ground, and didn't sing (Lyn remembers a friend from Canada writing to her about a Beatles concert and how awesome it was. She had never heard of them and couldn't imagine the craziness of the concerts and names of the bands at the time, like The Beatles, and The Monkeys) So you come back to Canada and you have a culture shock. Culture shock wasn't going to Africa, culture shock was coming to Canada. My mom used to buy clothes (in Canada, to take back to Africa) to get us through four years, so we'd come back with clothes that were four years out of style. And that matters when you're a teenager. Other kids were wearing jeans at school, I was wearing dresses, and trying to roll them up at little at the waist, so they were shorter like a mini skirt.

Have you ever been overseas?

When we came back and forth from Africa, you paid from point A to point B back then. So you got side trips. When we were old enough, mom and dad would stop with us at different places and we got to visit there. So we'd been to Switzerland and England. We stayed a lot at foreign missions, like a hostel. We went to Italy for one of my last big trips. Then in 2007, just before the kids got married (Cheryl and son-in-law Justin), we booked at trip to France to see my brother, and we stayed for two weeks with him there. That was great. I'd live there probably. We were kind ofnortheast of Paris and went to Vimy Ridge, then went into Belgium for a day. We also went to Scotland where my mom's family is from, and I saw my grandfather's farm. I had relatives there. That was a long time ago!

What different jobs have you had?

I've worked in hospitals from Vancouver to Port McNeil, B.C. to Ontario and Saskatchewan. So mostly in hospital, nursing, and mostly in intensive care or emergency. And then I worked for Health Canada for a few years as a community health nurse. Then I taught the nursing program, and I'm now doing that again. I also joined the Canadian Army reserves for four years. I did two years as a manager as well.

What life event changed you?

Getting married probably did. It changed my plans. Not necessarily in a bad way, just changed them (laughter).  We were actually going to go to Africa, but that changed too. We had been approved to go to Burkina Faso in 1988 to work with my older brother. But there was a coup. He was marched off of the ranch at gunpoint, so that never happened for us (going back to Africa) So I guess getting my nursing and getting married then having children all changed me.

What talents do you have?

If you ask me about your heart, I can explain to you about your heart. I like to sew. I used to sew a lot. I made the kid's clothes when they were younger, until they quit wearing them. Then they didn't want homemade anymore. I used to draw and paint a lot.

Where do you see yourself in 5 years?

Maybe travelling. It will just depend on how Justin is (her son-in-law) That's a life event that's changed us too, is having a son-in-law with kidney failure. There's no way we can leave them now. That's kind of grounded us and made us want to stay here. I guess that's what God had planned, was for us to be here. Another part of my five year plan, and I don't know if it's going to work out, but my dream is to go work out on the Mercy Ship for a year. It's a floating hospital ship, and it travels around to different countries. It was just in the Camaroons I think, and they dock and then do clinics for people who come with physical needs, or for surgeries that can't be done in their country. So they come and have surgery on the ship, then conveles, and then sometimes the ship will go on it's way and do clinics. Then on the way back through they would drop off the patients that had recovered. John could go as a chaplin or a cook and I could go as a nurse.